Albert Herter was born in 1871 in New York City, the son of Christian Augustus Herter, one of the legendary Herter Brothers. He studied at the Art Students League with J. Carroll Beckwith. After marrying fellow artist Adèle McGinnis in 1893, they honeymooned in Japan, using the trip for both pleasure and artistic pursuits. While in Japan, they made a series of paintings that were used to illustrate an article about Japanese customs in 1895. The couple’s time was split between New York and Paris, where Herter studied at the Académie Julian with Jean-Paul Laurens and in the atelier of Fernand Cormon. Throughout his career, Herter never limited himself to one genre of art. Instead he produced illustrations, portraits, posters, and even murals. Along with his wife, Herter established Herter Looms in New York in 1908, which specialized in hand-woven textiles, and opened another branch in San Francisco in 1913. In 1917 Herter moved to Santa Barbara where he settled permanently and both he and his wife worked as critically acclaimed muralists.

Herter exhibited at the Pennsylvania Academy of the Fine Arts in 1876, 1878, from 1894 to 1899, and in 1902 and 1924; Paris Salon in 1890, National Academy of Design in 1893 and 1894, Boston Art Club in 1894 and 1895, Art Institute of Chicago, Atlanta Exposition of 1895, Socièté Nationale des Beaux-Arts from 1895 to 1898, Nashville Exposition of 1897, American Watercolor Society in 1899, Paris Exposition in 1900, Panama-America Exposition in 1901, and the Corcoran Gallery in 1907. He was a member of the American Watercolor Society, Century Association, Society of American Artists, New York Watercolor Club, and the Society of Mural Painters. He was also elected an associate member of the National Academy of Design in 1906. Herter’s works can be found in the collection of The Metropolitan Museum of Art and the Brooklyn Museum, New York. His murals can be found at the Saint Francis Hotel, San Francisco and the Los Angeles Public Library. 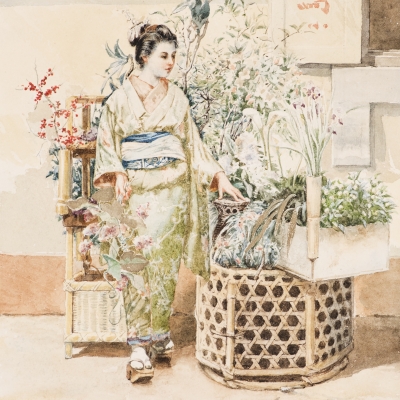